After leaving my VR Gun project for a while I decided to go to HackManchester 2013 and give it the push it deserves by creating not just the Gun, but a full VR experience. In 25 hours I managed to finish the weapon and modify an existing game named Angry Bots to be playable with all the freedom of a wireless system!

I won the “Best Company Project” award from the jury, and also was the finalist (2nd) for the “Best of All” competition. A true honour that motivated me onto polishing and showcasing the project for the Manchester’s Android Meetup months later with huge success 🙂

Ok, so what is this exactly? Basically it is a set of applications to detect the user’s movements to control and display a FPS version of the mentioned game. The user experiences a 3D environment that allows him not only to look around using stereoscopic vision, but walk, jump. crouch, aim… a full VR experience; and most importantly: in Real Time, without any cables and ultra-light, perfect for feeling deeply immersed.

All code can be found in my Github, I will explain here the key parts of the project, which are summarised in the presentation I used or the Android Meetup and can be found here.

The gun used is obviously my VR Gun. I coded the Arduino board  so I could actually track the on/off positions (only on first-call) for the trigger and the ammo clip modifying the original’s Makey Makey code. 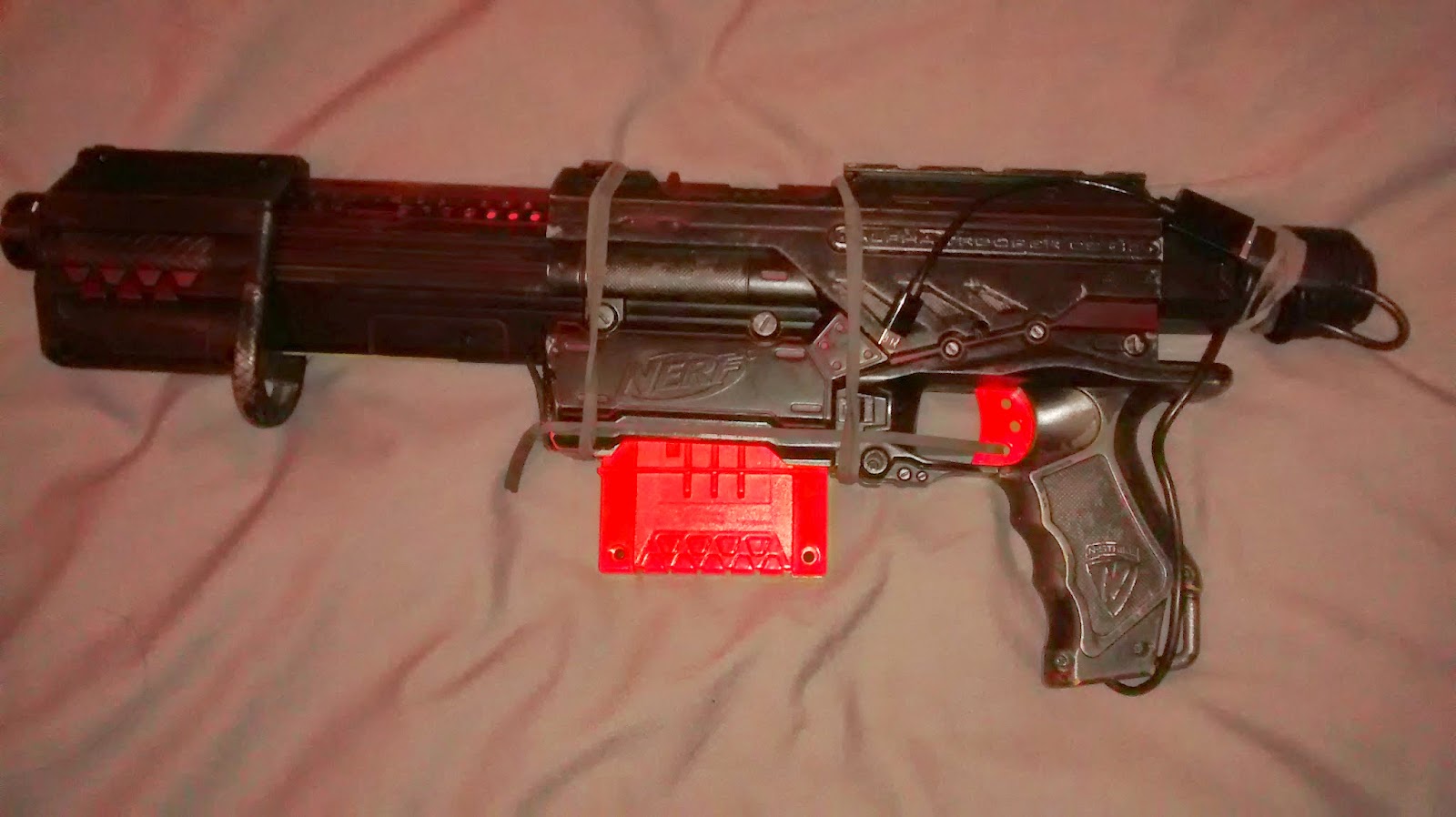 Through an OTG cable, the board is connected to a Galaxy S3 attached to the Gun itself running a very particular app. The app, inside DataStreamer folder, will listen to the Arduino output and also track the pose. The phone then has all the important information related to the weapon and can send it to the server (game). But not only that! Because the phone is in contact with the gun and knows when the trigger is pressed I also implemented some haptic feedback so, when the user fires the gun vibrates with a nice machine-gun rhythm.

Choosing the right phone is not as easy as it seems:

Galaxy S3 works wonderfully but still there are some scenarios where the user will have to hit the button every 5 minutes or so… until I code a proper solution (already found one but it has not been implemented yet, more in the last paragraph), and the 5V requested from the OTG makes the battery drain quite quicly (1h-2h).

For the movement I used a different phone running a pedometer, also bundled in the DataStreamer app, I created for my old Augmented Reality system. The important thing about this pedometer is that it not only listens to the strength of the steps but the rhythm so it is very resistant against noise, it could even run directly on the helmet! But instead I decided the user will put it in his back pocket, this way it can track the hip orientation and even the butt inclination…. this way the user could walk towards his hip and not his head and even crouch on real time or even lay down in the ground.

Because, as mentioned in the previous point, not all phones have a RT-compliant gyroscope, I decided to put a toggle button to disable the hip-butt pose detection and use the head tracking instead in case the phone is not powerful enough to keep the pose updated without breaking the immersion.

This is the most important part. I created a helmet out of foam during the Hackaton (that later was substituted by a more professional-looking black helmet) that holds a 7″ tabled (Nexus 7) and 2 lenses to the user’s face. The code running here is in the VRUnity folder and contains a Unity3D project. It is the  Angry Bots demo game modified in two ways: 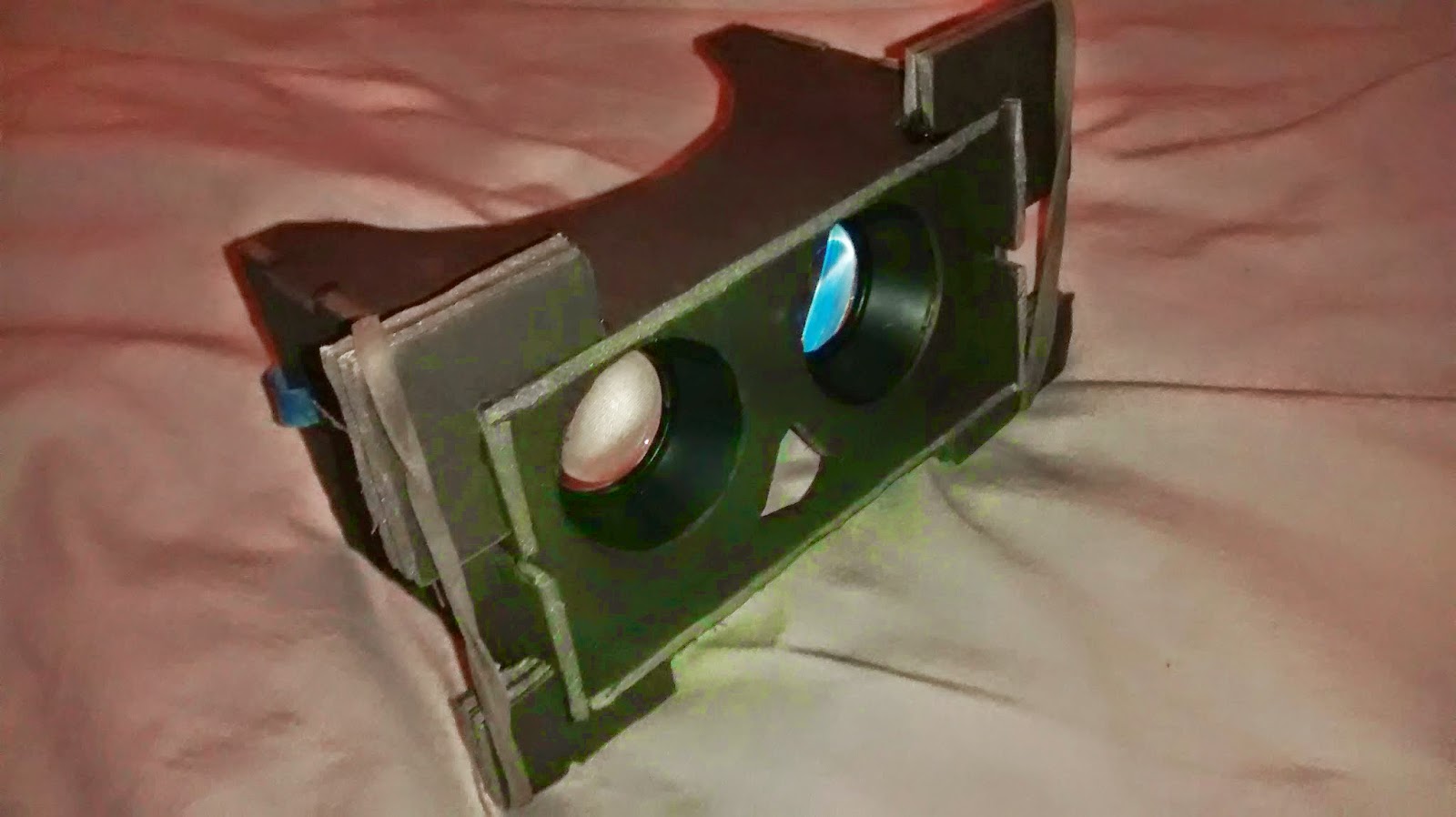 The biggest task here was not only finding what was not working with the OR SDK (it was not crashing, it was actually working but my communication system was not.. and it was its fault) but also creating the helmet. There are a few small details to have in count:

The first version was not the best; but after many tries, super-glue, cutting and breaking elastic bands I built a black helmet following all those guidelines.

The way everything works together is thanks to some UDP magic. The DataStreamer apps will bundle the information in Datagram packages and send it to the server (game). Once the game receive the package, it has to parse it and redirect it to the relevant Gameobjects that will apply the information.

The key for having RT here was to use a port for each possible message (fire mode, hip pose, steps, gun pose, etc.) so there is a file defining a set of offsets for the port and each listener will apply it when sending the datagram. On the server side there is one thread running per port, each of these threads is looking for exactly one type of message and as soon as it is received it is processed.

There are a few bits I am still not happy with and I will try to solve at some point.