After 5 years studying it comes time for the dissertation. You can choose one of the many subjects proposed by the professors , but I decided to go on my own creating a whole augmented reality system.

The original idea consisted in a program that should work in open environments, without markers, trying to naturally fuse the virtual and the real world. In fact those “open environments” were a problem, because giving the user so much freedom can result in  low performance visualization when using a smartphone. This was the key point and I wanted to success where other programs such as Layar (poor integration) or AiRaid (lack of freedom) failed.

The system was developed trough a year using C++ and OpenGL for bada smartphones and integrates some new ideas that makes it excel over other AR systems: 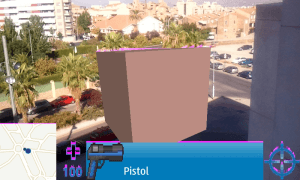